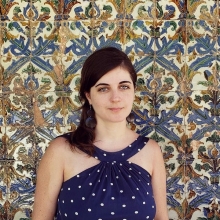 Daniela Alarcon (Ph.D. Social Anthropology, National Museum, Federal University of Rio de Janeiro, Brazil, 2020; M.A. Social Sciences, University of Brasília, Brazil, 2013) is a Mellon Postdoctoral Fellow at the Project “Dispossessions in the Americas: The Extraction of Bodies, Land, and Heritage from La Conquista to the Present”, at the University of Pennsylvania.

From 2020 to the present, she has served as a Postdoctoral Fellow at the Sergio Arouca National School of Public Health, Oswaldo Cruz Foundation, in Brazil, researching the mobilization of the Brazilian indigenous peoples and movements in the framework of the Covid-19 pandemic. From 2017-18, she was a Visiting Scholar at LLILAS Benson Latin American Studies and Collections at the The University of Texas at Austin.

Over the past 10 years, she has developed in-depth studies among indigenous peoples and other traditional communities from Northeastern and Northern Brazil, including the Tupinambá of Serra do Padeiro, in southern Bahia, and riverine communities from the Amazon, especially in western and southwestern Pará. Examining the advance of the agricultural frontier, speculative deforestation, tourism, the creation of restrictive conservation areas, and the implementation of infrastructural megaprojects such as hydroelectric dams, she has described and analyzed how the affected groups have mobilized to defend their territories, lifeways and collective projects.

In 2020, she published a graphic novel entitled, in translation, The Owners of the Land, co-authored with Vitor Flynn Paciornik and the Tupinambá leader Glicéria Jesus da Silva. In 2015, she directed the documentary film Tupinambá – The Return of the Land, which has been screened at festivals and other events in Brazil and abroad.

Her master’s thesis, which earned the Norm and Sibby Whitten Publication Subvention Award for Anthropological Monographs on Lowland South America (Society for the Anthropology of Lowland South America), was published in 2019, entitled, in translation, The Return of the Land: The Land Retakings in Serra do Padeiro, Tupinambá de Olivença Indigenous Territory, Southern Bahia. Her Ph.D. dissertation, awarded by the Graduate Program in Social Anthropology at the National Museum, Federal University of Rio de Janeiro as the best dissertation of 2020, is about to be published in book format, entitled, in translation, The Return of Relatives: Mobilization and Territorial Recovery Among the Tupinambá of Serra do Padeiro, Southern Bahia.

Among other works, she co-edited, with Brent Millikan and Mauricio Torres, Ocekadi: Hydroelectric Dams, Socio-Environmental Conflicts, and Resistance in the Tapajós Basin (2016, translated title), and co-authored, with Mauricio Torres and Juan Doblas, “The Owner is the One Who Deforests”: Connections Between Land-grabbing and Deforestation in Southeastern Pará (2017, translated title.)