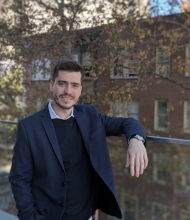 Santiago L. Cunial is a PhD student in the Department of Political Science at the University of Pennsylvania. He received his BA in Political Science from the Universidad de Buenos Aires and his MA in Political Science from Universidad Torcuato Di Tella. His work on health policies, and religion and politics has been published in several edited volumes and journals in Argentina and other countries in Latin America and Europe. He has been awarded prestigious scholarships from organizations such as the Fulbright Commission, Fundación Carolina, and the Open Society Foundation, among others. Prior to coming to the University of Pennsylvania, he conducted research at the Instituto de Investigaciones Gino Germani of the University of Buenos Aires, with funding from the Argentine National Scientific and Technical Research Council (CONICET).