Lunch will be provided. 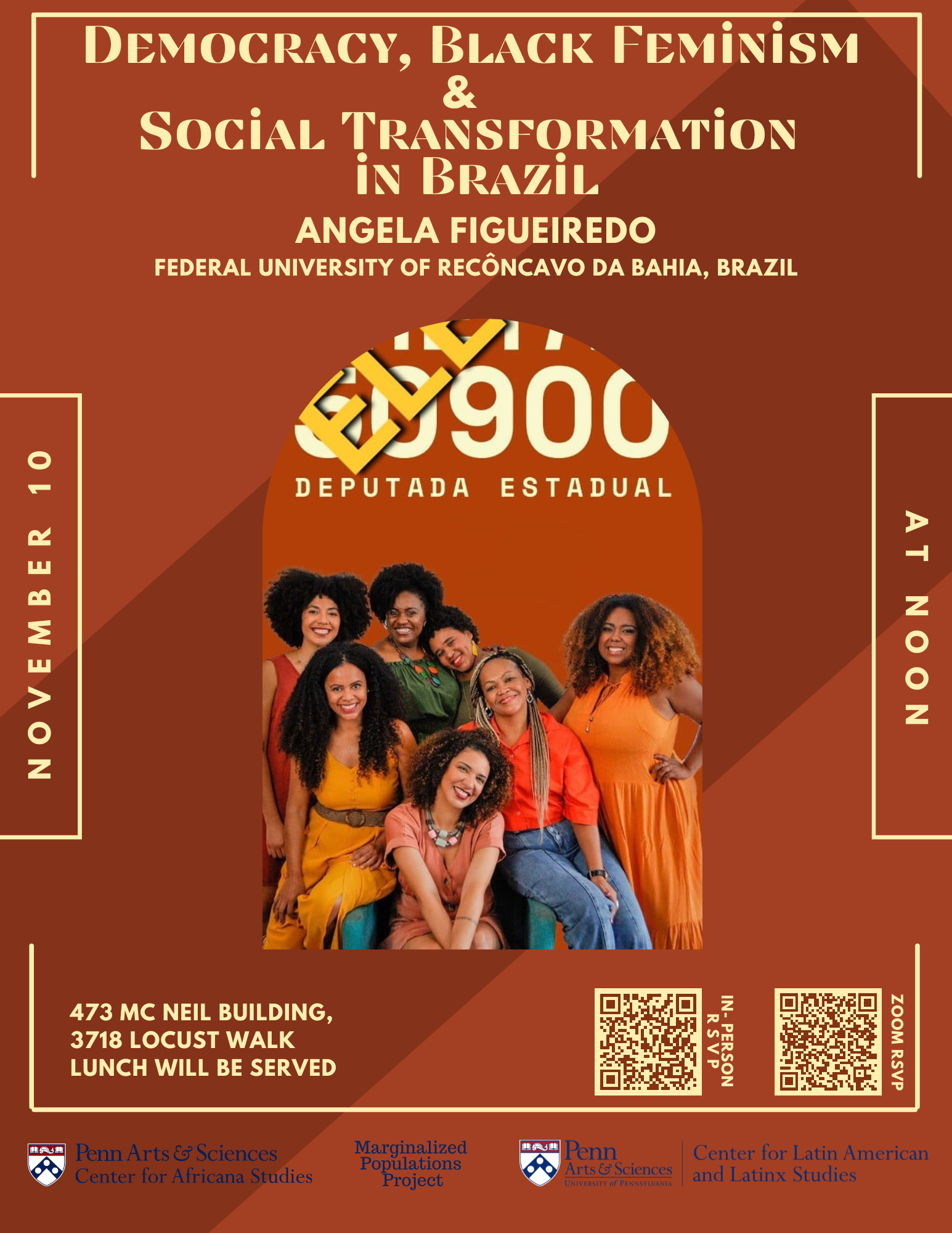 The political context of Brazil in recent years, specifically the period between the removal of President Dilma Rousseff’s government in 2016 and the election of far-right government of Jair Bolsonaro in 2019, is characterized by the loss of social and political rights, and an increase in the rate of unemployment. Brazil has the largest population of African descent outside of Africa. Brazil has 205 million Black Brazilians (pretos and pardos) which comprise are over 53% of the nation’s population. In Brazil there are currently 14 million unemployed people, while 33 million people have nothing to eat. The economic and social crisis generated by the COVID-19 pandemic that has already killed over 680 thousand Brazilians and the war in Ukraine have affected all countries with increases in the price of food, medicines and oil. We have seen an increase in cases of police violence, racism, violence against cis and trans women as well as gender violence in institutional politics. In addition, the increase of fake news in advertising and in the daily life of politics is worrying, particularly when fake news embraces a discourse that tends to minimize the devastating effects of the military dictatorship, which occurred in the period between (1964-1985). Such practices effectively constitute a threat to democracy in Brazil. In response to the rising rightwing government and their supporters, social movements have reacted to challenge them. Notably, the black women's movement has articulated itself and sought effective responses, including denunciation on social networks, political mobilization in the streets and, by highlighting solutions through the recognition that "without racial equality and gender, there is no democracy”. I outline here some possible answers, given by a researcher who has traditionally perceived and interpreted the world and its dynamics from a left-wing point of view, that is paying attention to poverty, racism, sexism and other social ills as social phenomena historically constructed by many Latin American countries.

Angela Figueiredo, is a professor at the Social Sciences Department of the Federal University of Recôncavo da Bahia in Cachoeira-Bahia, Brazil (CAHL – UFRB) and associated to the Graduate Program in Ethnic and African Studies (POSAFRO) and the Postgraduate Program in Interdisciplinary Gender Studies (PPGNEIM) at the Federal University of Bahia. Angela is also the coordinator of the research and activist group Collective Angela Davis. Angela has produced two documentaries Ebony Goddess (Deusa do Ébano - 2004) e Dialoges with the Secret (Diálogos com o Sagrado - 2013) and curated the Global African Hair exhibition that took place in Salvador, Bahia. She has published the following books: New Black Elites (Novas elites de cor- 2002), Black Middle Class (Classe média negra:- 2012), Black Beauty (Beleza Negra (2016) . Angela has written several articles on Black Feminism in Brazil, including Decolonial Black Feminist Epistemology (2021) and Letter to Judith Butler from an ex-mulatto woman (2016).