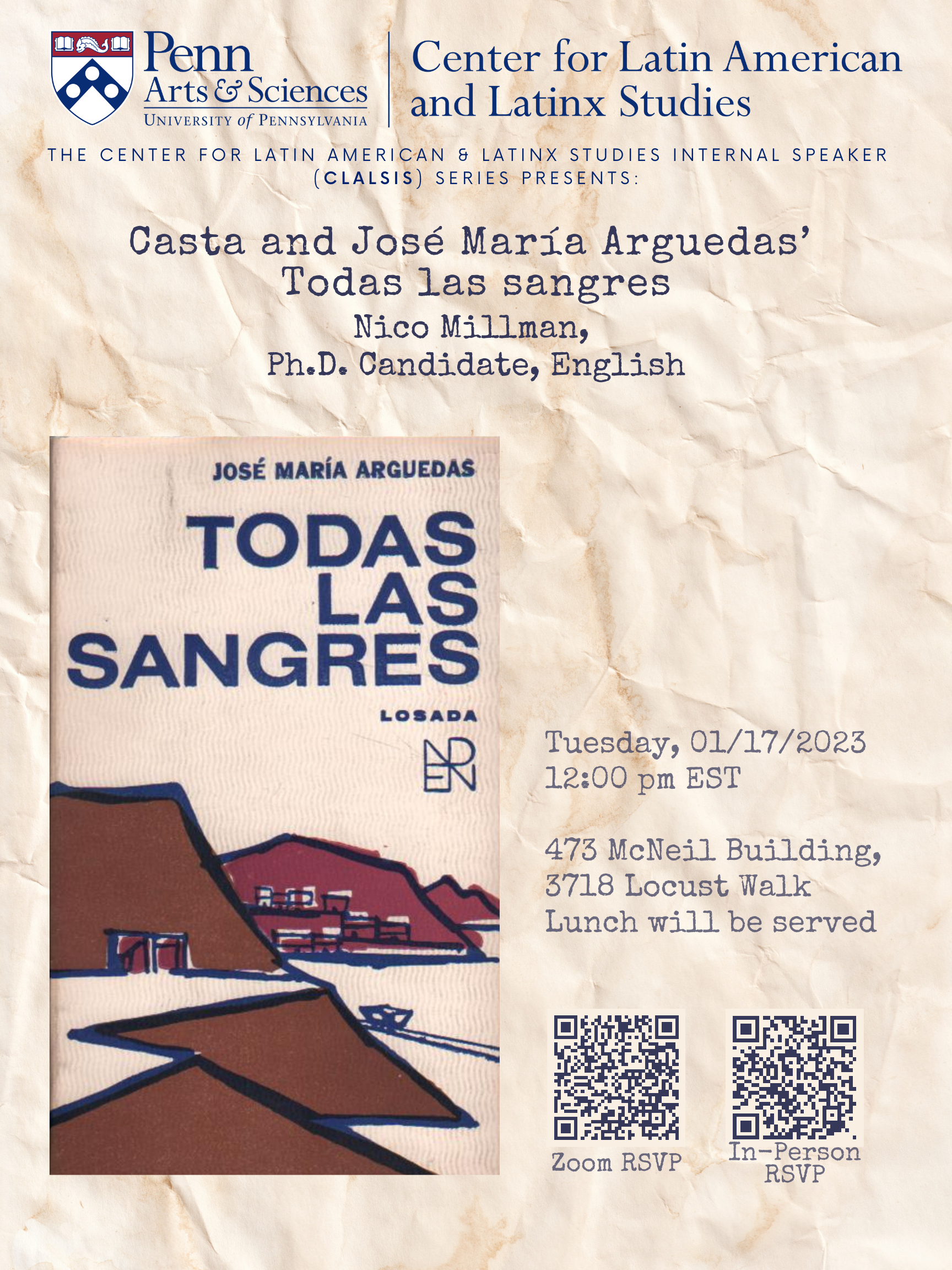 José María Arguedas’ untranslated 1964 Spanish-language novel, Todas las sangres, transmits a turbulent history of land enclosure, rebellion, and rural-to-urban migration in Peru during the 1950s and 60s. Todas las sangres powerfully encodes such histories of unevenly expanding global capitalism, as well as the persistence of social and economic relations that date back to the Spanish Conquest, including the colonial sistema de castas. Casta, generally speaking, is understood as a feature of Spanish colonial society that taxonomized and ranked the degrees of racial mixture and purity between Spaniards, Black Africans, and Indigenous peoples across the Americas. Todas las sangres pushes us to consider the fate of casta in Peru’s Andean countryside in the mid-twentieth century, a historical period marked by U.S.-led neo-colonial land enclosure for silver mining, peasant rebellion against hacienda landowners, and the expulsion of rural communities to urban port cities. It is in this context the novel reactivates a rich and palimpsestic set of etymologies encoded in casta, which range from its complex racial associations with the technical language for purifying varying grades of metallic ore to practices of breeding mules of a high pedigree. My talk will demonstrate that the novel shows us the ways in which casta ideologies, far from an archaic holdover from a feudal or colonial past, fuel the racialized structure of global capitalism, particularly in a historical moment defined by land enclosure, rebellion, and rural-to-urban migration in 1950s-60s Peru.

Nico Millman is a PhD Candidate in the Department of English at the University of Pennsylvania. He is currently writing a dissertation titled, Race, Dispossession, and Revolution: Literatures in India and Latin America. The dissertation project crafts a connected literary history of racial ideologies, land dispossession, and revolutionary movements in India, Peru, and Mexico. He examines novels and various forms of life writing (diaries, testimonios, autobiographies) produced from the era of anti-colonial struggle and national liberation in the early-to-mid twentieth century, to the period of revolutionary upheaval in the global 1960s, and to the present moment of neoliberal enclosures and anti-systemic, counter-globalization movements.

His research has been supported by the Center for the Latin American and Latinx Studies (CLALS) Field Research Grant, Foreign Language and Area Studies (FLAS) Fellowship for the study of Hindi, the School of Arts & Sciences (SAS) Sylvia Brown Research Award, the Center for the Advanced Study of India (CASI) Summer Research Grant, and the SAS Dissertation Completion Fellowship (2022-23).  His article, "Maoism and Memoir: Political Life Writing Across India and Peru," which draws upon a chapter from his dissertation, is forthcoming in the anthology, Life Writing as World Literature, edited by Helga Lenart-Cheng and Ioana Luca for the Literatures as World Literatures series at Bloomsbury Publishing.