Symposium: “Haitian migration through the Americas” 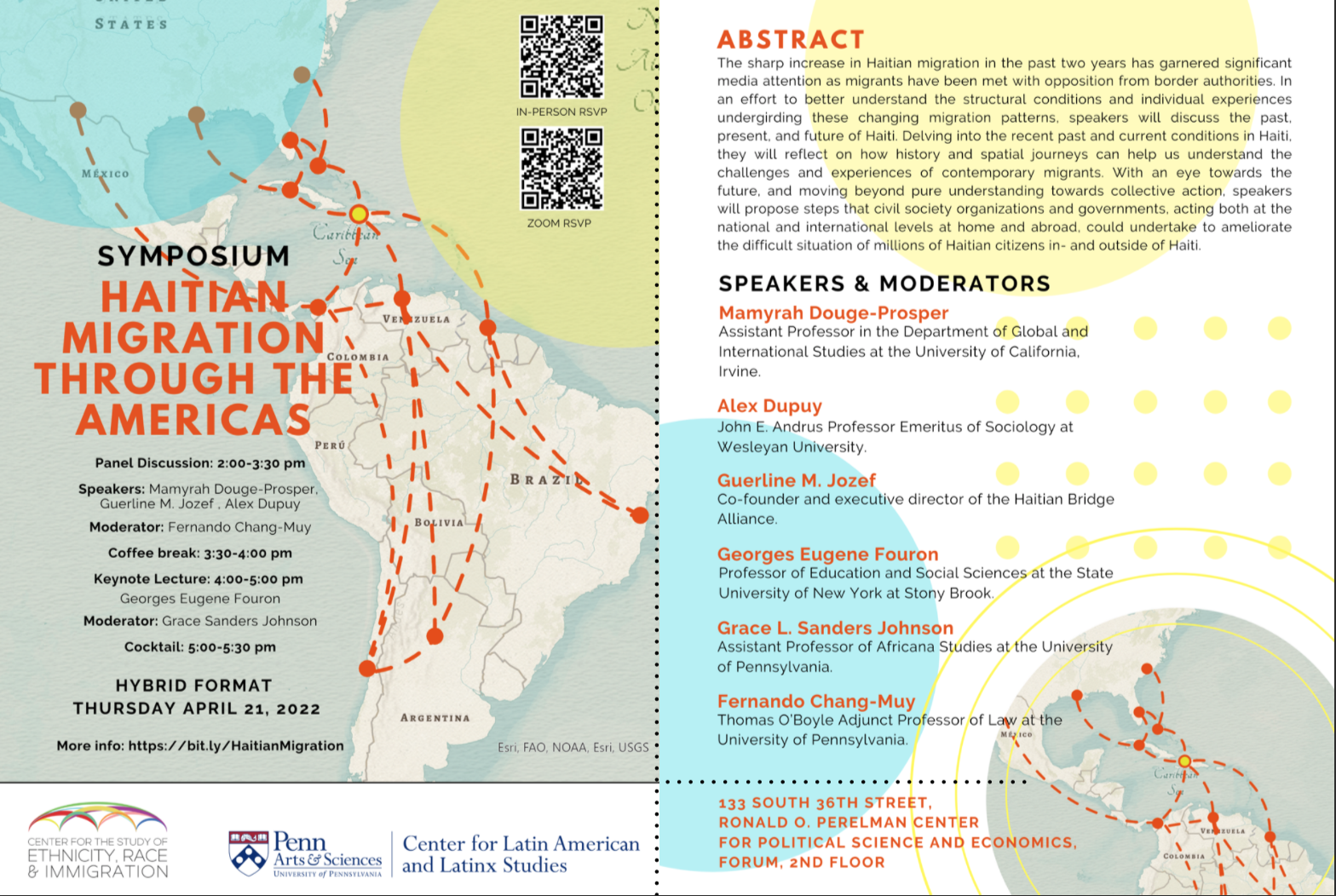 Massive migration from Haiti in the last two years has been in the news as migrants are met with opposition from border authorities. In an effort to better understand the structural conditions and individual experiences that intersect with the events of this recent past, speakers will discuss the past, present and future of Haiti. With a look at the past and present, they will reflect on how history and spatial journeys can help us understand the challenges and experiences of current migrants. With an eye towards the present and future, and to move beyond pure understanding to action, speakers will propose steps that civil society organizations and governments, acting both at the national and international levels, at home and abroad, could undertake to ameliorate the difficult situation of millions of Haitian citizens both inside and outside of Haiti.

MamyrahDouge-Prosper is Assistant Professor in the Department of Global and International Studies at the University of California, Irvine. She is also a founding member of the Black Radical media collective. As an international coordinator for the Pan-African Solidarity Network,a project of Community Movement Builders, she has been working to stand alongside the people of Haiti and support them in their different struggles. She has researched and written extensively about geopolitics of global capitalism, social movements in the Caribbean and Latin America—particularly Black and Haitian social movements—and the power of local actors shaping the postcolonial nation-state. Prosper earned her Ph.D. at Florida International University and spent a year as a teaching postdoctoral fellow at North Carolina State University. From there, she was awarded a multi-year postdoctoral fellowship at the City University of New York Graduate Center where she worked with the Center for Place, Culture and Politics as well as the Institute for Research on the African Diaspora in the Americas and the Caribbean.Then she joined Davidson College asa Visiting Assistant Professor in Africana Studies.

Guerline M. Jozef is the co-founder and executive director of the Haitian Bridge Alliance, a national grassroots nonprofit community organization that advocates for fair and humane immigration policies and seeks to guide, elevate, and empower Haitian and other Black immigrants from the Caribbean and Africa to fully integrate into American society while maintaining their cultural heritage. An activist, mother, sister, niece, and wife, she has dedicated her life to bring awareness to issues of immigration, social justice, domestic violence, and child sexual abuse. Ms. Jozef has received the Robert F. Kennedy Human Rights Award (2021) and the 2022 Father Jean Juste award from the National Haitian American Elected officials (NHAEON). Ms. Jozef is the Co-Founder of the Black Immigrants Bail Fund (BIBF) and the Cameroonian Advocacy Network (CAN).

Alex Dupuy is the John E. Andrus Professor Emeritus of Sociology at Wesleyan University. He has published broadly on social, economic, and political developments in Haiti and the Caribbean. He is the author of Haiti in the World Economy: Class, Race, and Underdevelopment Since 1700 (1989); Haiti in the New World Order: The Limits of the Democratic Revolution (1997); The Prophet and Power: Jean-Bertrand Aristide, the International Community, and Haiti (2007); Haiti: From Revolutionary Slaves to Powerless Citizens (2014); and Rethinking the Haitian Revolution: Slavery, Independence, and the Struggle for Recognition (2019); and more than three dozen articles in professional journals and anthologies. In 2003, he received the Haitian Studies Association’s Award for Service, and the Lifetime Achievement Award in 2017. Dupuy has also been an important voice about Haiti in the media commenting on Haitian affairs on news programs such as the BBC’s Caribbean Service, the NewsHour with Jim Lehrer, and local NPR stations in the US. Dupuy received his Ph.D. from the State University of New York at Binghamton, and he is particularly interested in issues of Caribbean political economy and social change.

Georges Eugene Fouron, a native of Haiti, is Professor of Education and Social Sciences at the State University of New York at Stony Brook. His research focus is transnationalism and its effects as experienced by Haitians in Haiti and those of the Haitian Diaspora. His latest book, authored with Nina Glick Schiller, Georges Woke up Laughing: Long-Distance Nationalism and the Search for Home(2001), combines history, autobiography, and ethnography to portray the Haitian experience of migration to the United States and the making of long-distance nationalism binding those who emigrate with those who are left behind. His latest manuscript is entitled Haiti’s Migratory Streams at the Crossroads of Global Capitalism and the Politics of Competing Empires. Fouron graduated from the University of Haiti in International Affairs in 1969, obtained a Diploma in International Relations from the University of the West Indies, Trinidad in 1970, and an Ed.D from Teachers College, Columbia University in 1985.

Grace L. Sanders Johnson is a historian, visual artist, and Assistant Professor of Africana Studies at the University of Pennsylvania.  Her areas of study include modern Caribbean history, transnational feminisms, oral history, and environmental humanities. Sanders Johnson has been awarded fellowships including the Thomas J. Watson Foundation, the Andrew C. Mellon and Ford Foundations, the Canadian Embassy Scholars Award, the Haitian Studies Association Emerging Scholar Fellowship, and the Woodrow Wilson Foundation Career Enhancement Fellowship. She was most recently a 2020-2021 Schomburg Center for Research in Black Culture Scholars-in-Residence Fellow. Sanders Johnson has worked with various archival projects including Concordia University’s Oral History Project Histoire de Vie (Montreal 2011) and has produced the art-archive installation Nou Pa Bliye: Haitian Feminist Expressions and Translations (2014). Her most recent work can be found in several journals and books including the American Anthropologist (2022), Caribbean Review of Gender Studies (2018), Caribbean Military Encounters (2017), and Sisters or Strangers? Immigrant, Ethnic, and Racialized Women in Canadian History (2016). She is currently completing her first book, White Gloves, Black Nation: Gender, Citizenship and Political Wayfaring in Haiti (under contract with University of North Carolina Press).

Fernando Chang-Muy is the Thomas O’Boyle Lecturer in Law at the University of Pennsylvania School of Law. He teaches at both the Law School and at the Graduate School of Social Policy and Practice on topics such as US Immigration Law, International Human Rights and Refugee Law, and Nonprofit Leadership.He served as Legal Officer with both the Office of the UN High Commissioner for Refugees (UNHCR) and the UN World Health Organization (WHO), AIDS Program. He also served as the first director of Swarthmore College’s Intercultural Center, Assistant Dean for Student Affairs, advisor to the Provost on Equal Opportunity, and lecturer on International Human Rights in the Peace and Conflict Studies.He began his legal career as a Reginald Heber Smith Fellow at Community Legal Services in Philadelphia serving as Director of the Southeast Asian Refugee Project, providing free legal aid to low-income immigrants and refugees in Philadelphia. He is also past founding director of the Liberty Center for Survivors of Torture, a project of Lutheran Children and Family Services, established to serve newcomers fleeing human rights violations.