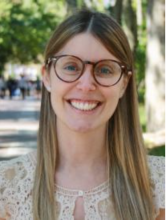 After one-year residence as Visiting Scholar in Latin American and Latinx Studies, Yasmin entered the PhD program in Sociology at the University of Pennsylvania. She came to our Center with a B.A. in Sociology at Universidad de Buenos Aires (Argentina), and an M.A. in Social Sciences at Universidad Nacional de General Sarmiento and the Instituto de Desarrollo Económico y Social (Argentina). She worked as a Research Scholar at the Health Department at the Instituto de Investigaciones Gino Germani (School of Social Sciences, Universidad de Buenos Aires). She has also worked as a Research Assistant in several government agencies, such as the Gender Observatory of the Judicial Power of the City of Buenos Aires and the Sexual and Reproductive Health Program of the Government of the City of Buenos Aires. She studies gender, sexual minorities and access to sexual and reproductive healthcare services.