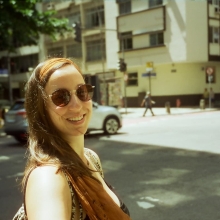 Anne-Marie Veillette (Ph.D. in Urban Studies, National Institute of Scientific Research 2022; M.A. in Political Science and Feminist Studies, University of Quebec in Montreal, 2017, Canada) is a postdoctoral researcher at the Center for Africana Studies and the Center for Latin American and Latinxs Studies, at the University of Pennsylvania.

Her Ph.D. research focused on urban transformations in Brazil, and more specifically in the favelas of Rio de Janeiro, where she conducted research in 2016, 2018 and 2019. Building on feminist and Afro-diasporic epistemologies, her work main objective was to offer a microanalysis of urban transformations based on the embodied experiences and knowledge of women living in the favela. She accomplished this work thanks to the doctoral fellowships from the “Fonds de recherche société et culture du Gouvernement du Québec (2017) and the Canada Graduate Scholarship Joseph-Armand-Bombardier (2018-2021).

Her master research offered an intersectional analysis of police violence—also in the favelas of Rio de Janeiro—based on the experiences and resistance of women. She obtained her master degree with honours.

As researcher, she has also engaged in theorizing ‘feminism’ in the favelas, through the concept of ‘racialized popular feminism.’ After publishing a first article on the subject, she continues this work with the Núcleo de Estudos em Saúde e Gênero (Center for Gender and Health Studies), founded at the Pontifical Catholic University of Rio de Janeiro (Brazil), where she was also a visiting scholar in 2019. She recently published with Nilza Rogéria Nunes: ‘Mulheres de favelas e o (outro) feminismo popular. (Women of the Favelas and the [other] Popular Feminism’ in the Brazilian journal Estudos Feministas.

Since 2020, she is co-researcher, with Mélissa Blais (UQO), on a research project financed by the Réseau Québécois en études féministes (Canada) called: ‘Researchers’ Emotional Conflicts During the Research Process on Social Protest: an Analysis of its Ethical and Methodological Implications’.

Since 2017, Anne-Marie has punctually participated in the coordination of TRYSPACES (Transformative Youth Spaces)—a research partnership financed by the Social Science and Humanities Research Council of Canada—and is now working on a project to rethink urban comparison, using the quilt as a tool to link the four cities of the project (Montreal, Paris, Mexico, Hanoi). She collaborates with Julie-Anne Boudreau (INRS & UNAM) and Célia Bensiali on this project.

Finally, she worked for many years with Geneviève Pagé (UQAM) on a research project that analyzed the efforts to integrate an intersectional approach in the CALACS, a feminist organization based in Quebec (Canada) whose mission is to support the survivors of sexual violence.